Transplants are an American punk rock/rap rock supergroup. They formed in 1999 when Tim Armstrong (of the bands Rancid and Operation Ivy) played his friend and roadie Rob Aston some beats he had made using Pro Tools and asked Rob if he would consider contributing lyrics. Initially, Tim played all the instruments himself but as the project grew, he invited musician friends such as Matt Freeman (Rancid), Lars Frederiksen (Rancid), and Vic Ruggiero (The Slackers) to add to the sound. Before long, Tim and Rob decided to officially form a band, but to make things complete, they wanted a drummer, so Travis Barker from Blink-182 was asked to join in 2002. Tim first became inspired to work with loops and samples after being introduced to London's speed/garage scene by Kerrang! magazine writer Mörat in the mid-90s.

The group's music is a combination of hip hop, reggae, drum n bass, dub, and punk. Although many musical genres are used sparingly throughout the album, punk and rap remain as the most prominent styles. Lyrically, Rob Aston describes their songs as ranging from topics such as murder ("Quick Death") to the passing of a loved one ("Sad But True") to failed friendships ("We Trusted You").

After the release of their first album, The Transplants briefly disbanded in 2003, due to all members being involved in their own projects, including Rancid and Blink-182. Then in 2004, they reunited to record their second album (Haunted Cities) before going on hiatus again until 2010 when the band has started to record new material.

After two years of recording, Transplants released their debut album Transplants on Hellcat Records in October 2002. In the end, the album was recorded and mixed entirely in Tim's basement. Special guest vocalists included Eric Ozenne (The Nerve Agents), Davey Havok (AFI), Son Doobie (Funk Doobiest), Danny Diablo (Crown of Thornz, AKA Lord Ezec), Lars Frederiksen (Rancid) and Brody Dalle (The Distillers, ex-wife of Tim). Brody sings on the track "Weigh On My Mind", which Tim, at the time, described as "their song."

The singles "Diamonds and Guns" and "D.J. D.J." quickly became MTV favorites and earned the band critical and commercial success. "Diamonds and Guns" and its unmistakable piano hook played by co-producer Dave Carlock was featured in TV commercials for Garnier Fructis shampoo and Neutrogena and the song "Tall Cans In The Air" was featured on the soundtrack for the movie Bulletproof Monk (2003). The band followed up the record's success by touring with the Foo Fighters.

By 2003, the band had temporarily disbanded, while Travis worked on then-upcoming Blink-182 album, and Tim worked on Rancid's Indestructible.

In 2004, during an extensive Rancid hiatus, Armstrong decided to bring the Transplants back together. The band's second album, titled Haunted Cities, was released in June 2005, just four months after Barker's former band Blink-182 announced their hiatus.

The album's first single, "Gangsters and Thugs" was a hit and the band began touring on the 2005 Warped Tour. After the Warped Tour, Transplants started to plan a large North American tour with Pennywise and wanted to release a second single. The band shot and released another video for the single "What I Can't Describe." However, Break-up rumors began to swirl.

Amidst all the turmoil, the band released the Chopped and screwed version of Haunted Cities on November 1, 2005.

Soon after the cancellation of the tour, two band members announced several more side projects that they would be embarking on during the Transplants break. Travis revealed that he would be starting a tour with DJ AM and also a new band with Rob and DJ Paul Wall which would become Expensive Taste. Rob Aston revealed that he was working on a solo album.

In an interview with Rob Aston and Paul Wall on January 16, 2006 about their project, Expensive Taste, Rob stated "The Warped Tour had just ended and Transplants had just broken up". This led to some confusion over whether the band had officially broken up, or not. Despite the statement made by Aston about how the band had "broken up", frontman Tim Armstrong contradicted this statement on a recent MySpace bulletin. He stated: "In the upcoming years, I hope to make another Transplants album. I love recording with those guys".

From to 2006 to 2009, the Transplants had been "on hold", as all the members had continued working on their own projects. Armstrong was busy touring with Rancid promoting their new album, Let the Dominoes Fall. He also released his solo album, A Poet's Life, in 2007. Travis Barker reformed Blink-182, who toured during the summer of 2009, and also recently formed a new band called Expensive Taste, along with Aston.

In January 2010, Barker announced on his twitter account that the Transplants were reunited and are in fact recording new material in 2010. The band announced that their new website will be posted in February 2011. It was also announced that the 3rd album will be released on the bands original home at Hellcat Records.

Tim Armstrong and Skinhead Rob appeared as guests on Travis Barker's first solo album Give the Drummer Some along with ex-Guns N' Roses guitarist Slash on a latin rock influenced song called "Saturday Night". The band performed the song live on Conan March 7, 2011, with Mix Master Mike on turntables, Elvis Cortez on guitar and Kevin Bivona on bass. Slash did not take part in the performance.

In an interview with 29-95 in April 2011, Barker revealed that material for the Transplants album had been written since August 2010, and that 16 songs were already written by Armstrong, Aston and him for the album. He also said that he expected around 30 songs to be written, with the best 12 to 15 making the cut. Later on November 13, 2011, an announcement was made from the band's official Facebook page that they were finishing up their new album in December. Soon on November 29, Armstrong revealed that the album was slated for a spring 2012 release date, which was soon followed by a new Rancid album in that summer.

On December 16, 2011 Aston posted a photo on Facebook revealing Kevin "Sweatshop" Bivona as the newest member. After assorted announcements during 2012, the third album, titled In a Warzone, was finally released June 25, 2013. The first single, "In a Warzone", came out April 2, 2013; a second single, "Come Around", was released the following week on April 9. 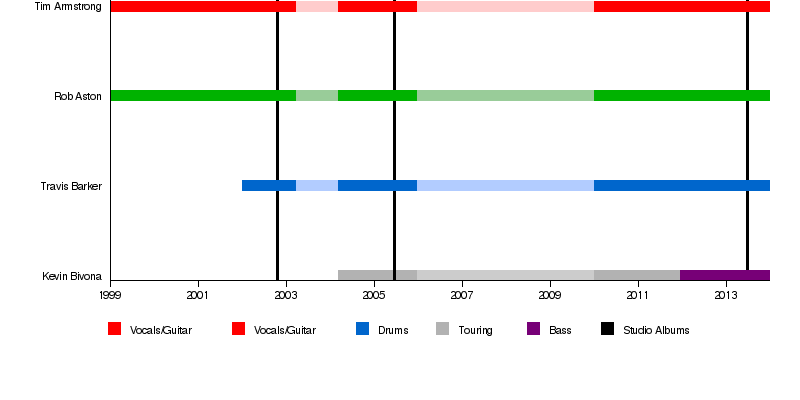 Retrieved from "https://musicfacts.fandom.com/wiki/The_Transplants?oldid=5382"
Community content is available under CC-BY-SA unless otherwise noted.