Dysentery Gary is a song by Blink-182 on their Enema of the State album.

Tom: I wrote that song from a point of view. What if you were a guy who liked a girl, but the girl likes a different guy? It's kinda like 'I hate that guy, but I'm not sure why I hate him.' That's where it's supposed to come from. This guy is really frustrated because this girl doesn't like him, so he's going to make fun of this other guy. 'I can't think about any cruel things to say about him, but f%#k, I just don't like him.' That's the attitude that song has. 'And this girl broke my heart.' That'll make you feel a little bit better. 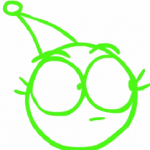